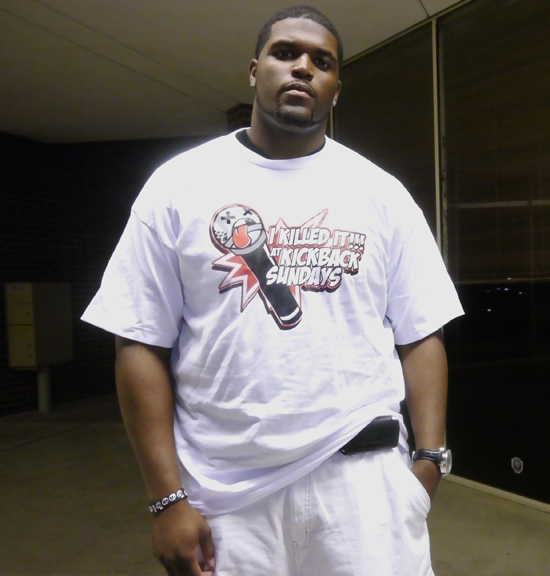 Last nights KICKBACK SUNDAYS was another one for the books. Besides the networking, SF2 Media Group teamed up with 24 HR Grind and Pairadime Music to offer an opening performance slot for The breaking Point Tour starring Emilio Rojas, which hits Houston this Sunday May 6 at The Engine Room!

We had 3 rounds of performances to see who would win. Round #1 went to @iamLyric , Round #2 went to @ETwatchMe and Round #3 went to @YoungGofOCP. All 3 of these artists have been attending KICKBACK SUNDAYS consistently and it shows! Picking a winner was not going to be an easy task, because all 3 put a little something extra in their performances tonight! Lyric really raised the bar with her performance. She showed that she was not afraid to stare you down and command attention, she had the crowd early on. ET shocked me, this was an entirely different guy than what I had seen in the previous weeks. To describe his performance as high energy, is not enough! Winner of the final round, was Young G. Every week, this guy gets better. I know this is not the last time you will see this name. Avery humble guy, but when he is on the mic, look out!
Doughbeezy put a twist on the judging tonight, it was not going to be from the roars of the crowd! You would not be able to scream twice! This was going to be accurate and you would have to SHOW everyone, who you voted for! GREAT! Let’s be honest and fair about it! KICKBACK SUNDAYS was built on the foundation of integrity, and we are always open for suggestions on how to improve and make things better! The room was divided in 3 parts and the winner was @ETwatchMe! He also earned our KICKBACK SUNDAYS shirt! Yes you gotta earn these shirts, not to be sold or given away! This guy travels all the way from Beaumont every Sunday with @verserecords , gets to SF2 North on time to sign up. No excuses for anyone else in Houston who has issues. Hard work pays off with #RealResults.
SUPPORT Kickback Sundays artist, @ETwatchMe this Sunday at the show! We have tickets at both stores.
Photo by Leon Prevost

This entry was posted in Uncategorized. Bookmark the permalink.